Ben Robinson : Grateful for the Haunting: An Interview with Sadiqa de Meijer

Over the turn of the year, I had the opportunity to interview Sadiqa de Meijer about her new book alfabet / alphabet – a memoir detailing her life with/in language. alfabet / alphabet is full of many startling insights about language and the practice of translation. I was going to write that Sadiqa moves effortlessly between English and Dutch, but I don’t know if that is the correct way to think about her work or her book. Perhaps it is more accurate to say that Sadiqa makes us newly aware of the effort involved in living between and among languages. The book so beautifully catalogues all that comes along with a language – the embedded sound and sense.

I am newly grateful for Sadiqa’s work after having the opportunity to speak with her; hopefully, this conversation will be of use to you as well.

BR:    Hello Sadiqa! Thank you for agreeing to this conversation.

Let’s start at the end. In the acknowledgements section of the book, you write that conversations with Don Share, Christian Wiman and rob mclennan sparked this project. I’m wondering if you can say a little more about these conversations, as well as the process of moving from someone asking you an interesting question to deciding that the question is worthy of writing a book about and then actually following through and writing that book. I guess what I’m asking for is an origin story of the book – how did it come to be?

SdM:  Sure - around the time that Leaving Howe Island came out, rob mclennan asked me in an interview how Dutch influenced my writing in English. Also, Don Share and Christian Wiman had a podcast where they discussed specific poems from Poetry Magazine, and in response to "Pastorals In The Atrium" - a poem that conveys a visceral missing of a Dutch river (and contains the word landschap, which English adopted) - they mentioned hearing Dutch sounds within the English. So the question was on my mind, and I felt that the answer was largely unexamined within me. At first I only started thinking it over - and taking notes here and there, reading some initial material on language - wanting to figure it out for myself. Then I thought I would write an essay, but what arose was sprawling and unwieldy - anecdotes, analysis, translation - that’s when the format of the book came to mind, the notion of twenty-six short pieces, which gave me space and freedom. I think it took another two years then to complete.

BR:    You mention that the book takes its structure from the twenty-six letters of the alphabet. The relevance of this form, given the book’s content, seems fairly clear to me, but I’m interested in how this form may have pushed you. Were there letters that you found difficult to find content for? Or were there memories that you had a hard time finding a place for because you had already used the relevant letter?

SdM: Right - the main effect of this approach, to me, was that the chapter title format (the same word in Dutch and English) inflated the sense of closeness between the two languages; I couldn’t pair terms like verf/paint or wolk/cloud - which I sometimes wanted to do. But that implied closeness does resonate with the work’s atmosphere of subtle loss and transition. The format also made me aware of linguistic patterns; most Dutch ‘v’ words start with an ‘f’ in English, for instance. The pairing that was immediately clear and right to me was ik/I, as well as the non-pairing (because untranslatable) zwijg - whereas xenofobie/xenophobia was essentially a forced move. I tried to have the title words of the opening chapters match exactly - accent, bitter - and then introduce a slow divergence (which contracts again later). Flits/flash was originally the title of the chapter tijd/time, which features photography - and I would’ve liked to keep it that way, but chronologically what is featured in the ‘f’ section had to come earlier, and the ‘t’ part later. So those are some examples of the moments your question anticipates.

BR:    Fascinating what you say about chronology – I hadn’t realized that your constraint would also greatly limit what order the pieces could go in. It seems amazing that the book flows as well as it does then with a nice balance of the memoir pieces, your more general reflections on language and translation as well as the notes on translating particular Dutch poems. Alongside the question you just answered, I’m curious if there were moments where you either decided or were forced to, as you say toward the end of the book, respect the untranslatable? Were there memories/poems/insights that you had thought to include but never quite got a hold of, that you ended up leaving out of the book for one reason or another?

SdM: Thank you, Ben. That’s an interesting question about the material left out of the book--because I hadn’t thought of it in terms of the untranslatable, but more in terms of not being able to fully meet it as a writer (meaning that, for now at least, it dwelled at the limits of my skills). To conceive of that as a failure of translation seems exactly right; it was respecting that I could not translate the memory or insight into language. The parts that came closest to realization were a section on onomatopoeia in the Dutch language, and an exploration of the sounds of Arabic within our home, through my father’s prayers. I know those subjects will haunt me and I’m grateful–that is what future works are for.

BR:    Yes, I like how you’ve phrased this. I also wonder how this process of translating a thought/feeling/idea into language might be impacted by form.

At one point in the book, you describe a trip you took to hear the poet Leo Vroman read and how it was a very charged experience. While you were waiting for the reading to start, a barge passed by bearing the name of your mother on its hull and you say, it would be contrived to write that in a story, but this was real life.

We’ve already talked a bit about your process in terms of finding a form for this book, but I’m also interested in what writing in prose might have opened up for you as a poet. Did nonfiction free you up to address new content that might have felt unavailable or inaccessible thus far through poetry? And in a more specific sense, I’m fascinated by these types of moments or images that seem excessively resonant or “unreal” even though they have been pulled directly from reality. Did you have any insights into, or other experiences with, this phenomenon of images or details that seem too didactic for poetry or fiction but are effective in nonfiction?

SdM:  I didn’t think of the prose as freedom - poetry feels much freer to me - but you’re right that in the particular sense of naming a resonance such as that barge, the idea of writing with a fidelity to what happened makes certain things possible. It was a constraint that also allowed me to stay with some subjects longer than in a poem - because then I would have probably made associative, sideways moves instead. But what I’m expressing is particular to how I work with those media, or have worked with them so far - of course there are writers who make prose move in very unexpected ways. As for those moments that seem unreal although they occurred - I think life holds many of them, and is also full of the mundane and uninterpretable; in every sense, life exceeds what we can make of it in art. When I mull over your question, I also recognize that I have a protective sense over the resonances in my own life - it’s almost as if exposure diminishes their power. So perhaps that is as much of a reason to share them judiciously as are the aesthetic ones.

BR:    Speaking of your poetry, six months before the release of this book, you published your second collection, The Outer Wards. I see some parallels between the two in terms of a shared focus on family (albeit, with you occupying different roles), as well as that excellent line from “It’s the Inner Harbour Neighbourhood, but Everyone Calls It Skeleton Park” about the danger of people “who think they have no history,” which struck me as a possible impetus for alfabet/alphabet. Can you speak about the relationship between the two books? Were you working on them concurrently? Do you see parallels between the two? Were there any pieces that started in one book and then moved over to the other?

SdM: I did work on the books concurrently. At the time, they felt very different, in their genres and also in the subject matter of The Outer Wards being fairly current, while alfabet / alphabet was a long reach back. Where they converge is in their draw on Dutch landscapes. I knew I was invoking something of the other book in the poem ‘Red Eye’: “all the years I waited, sleepwalking, speaking a daft language flawlessly.” But the most striking overlap, in hindsight, is in the character named Wouter in the poem ‘Paradise Found’, who appears again unnamed in the closing paragraphs of ‘alfabet / alphabet.’ In both instances, his hands are described - kind and calloused, loaf hands, grafting trees, cradling a bird - and I understood afterwards that they represent for me the human contact with the landscape. The distance that I want to close with words is shortest there. 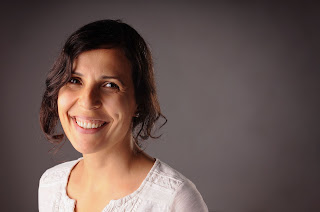 Sadiqa de Meijer is the author of the poetry collections Leaving Howe Island and The Outer Wards. Her work has won the CBC Poetry Prize and Arc’s Poem of the Year Contest, and was a finalist for the Governor General’s Literary Award and the Pat Lowther Memorial Award. She lives with her family in Kingston, Ontario. 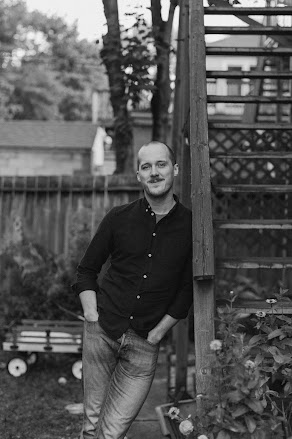 Ben Robinson is a poet, musician and librarian. His most recent chapbook is Without Form from The Blasted Tree. He has only ever lived in Hamilton, Ontario on the traditional territories of the Erie, Neutral, Huron-Wendat, Haudenosaunee and Mississaugas. You can find him online at benrobinson.work.