dissections is the culmination of a pain diary that I began keeping in 2019. As someone who repeatedly faces skepticism and indifference from medical professionals, the project was a way to connect to and understand my body and its day to day ailments.

Initial entries were very sparse: the body part that was in pain and a short description. As the project moved forward, I found myself connecting specific sensations and types of pain to moments in my life and began contemplating the dialogue between the physical body and memory. This took the shape of comparing a shoulder ache on morning, for example, to an old pitching injury. Each day presented a new opportunity to delve deeper into each ache and pain until I then began to consider these entries as an autopsy or geological survey of the body: a way to make sense of my chronic pain and to delve beyond it's corporeality. How much of one’s body parts’ pain are connected to a specific event and are there elements under the skin that would reveal this connection?

Ultimately, I consider dissections to be a written historical record of a body in near constant physical pain and a manifesto directed at those who would discount this day to day struggle. 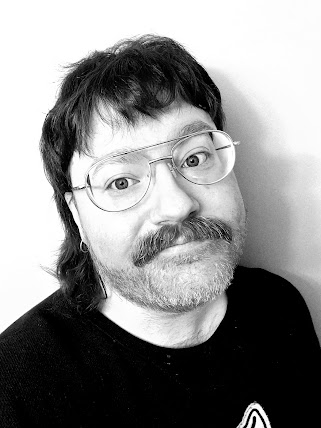 df parizeau is a scottish/french settler, writer, fibre artist and chronic pain sufferer, who still ties their shoes "bunny-ears" style. Their work has been featured online and in print by publications in Canada, Finland, the UK, and the US. They have a firm belief in the 3-0 curveball and that cherry is the best pie. Their debut chapbook dissections was released in 2022 with above/ground press.