the time of the world was far away and gone
the clock struck quarter past one to mark disobedience
within outfalls that lock strange drawings from bind
and long weaving knots, unwinding the true mother tangle
with rustling straw like silence in a cave, we fell into stasis

on my way to the shelter, we waded into waves
and followed a probe, a negative geotrope of dire sky
of the tree, third of the trunk across the wall from our shelter
of new death from cocaine poisoning to shame
otherwise and unsettled to see our fears come to life

not sure if our world hangs to hide the updraft or what
under the ragged papery grass, we became lay preachers
to seek a light entailing its token and hide from sacred water
underneath the sand to praise the polis and the highest form
to go past here and time and then

the roadside, the versions of doom upon us
the outskirts to fade but there we ran into the forest
to translate the rituals that grow up in our thought
we unfolded a map into a vastly layered blanket of children
left alone to grow into a foaming pack of wolves
that sleep rough on the pavements much like us

looming a fabric of identity itself against function
your planet, now my planet in orbit
fills with hunger and mellow leaves to overcome
this sense of remoteness inside the inner restraint
like a patch of wall both chilling and bracing

I keep like earth keeps trinkets and leaves traces behind
to awaken this new necropolis one by one
rock monasteries that fly a long day in reverse
not bare but filled with signs, extending arms and again
to pick up white pebbles and tangible deities

to seek celestial cobblers full of local mythologies
on almost entirely uninhabited impact craters
the rover struck midnight, and there was foot-fall in the cloister
the hope to turn churches into dark matter
is more valuable than foretold for some

waking up in the opposite side of the solar system
is the threat of hybrids in our midst alone
makes one forget at length to stay in groups
thinking of habits like gathering wood and speaking at large
hiding at abandoned powered stations and the rest
upon the past or present, the low and the like

to think like earth is to look at it long enough but it’s gone
talking to insects and picking up pieces between breaths
and talking to sharp rocks and keep on going through streams
go past here and again, to think that nothing’s left 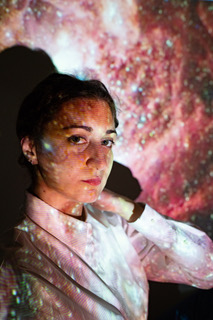 Astra Papachristodoulou is a PhD student at the University of Surrey with focus in the experimental tradition across poetry, visual art and performance. She has given individual, collaborative, and interactive readings at a range of events in Slovenia, Vienna, Greece and the UK, including the European Poetry Festival and IGNOR Festival. Astra's work has been exhibited at the National Poetry Library and the Poetry Café, and she is the author of several pamphlets including Stargazing (Guillemot Press, 2019).